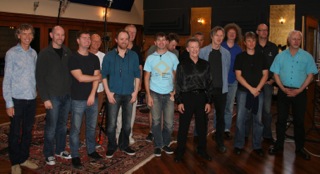 A recently produced recording for Rob E. Thomas, featuring 6 big band tracks and 7 jazz combo tracks. Some behind the scenes video from the recording studio. Stay tuned for the release!

I recently finished producing an album for Rob E. Thomas, a veteran of the Aussie music and musical theatre scene. Rob picked an excellent mix of standards, show songs and pop songs. We recorded at 301 with a stellar band: Dave MacRae, Bret Hirst, Jim Pennell, Andrew Gander and Andrew Wilkie in the rhythm section. Six of the tracks were big band, and in the brass and saxophones we had Nick Bowd, Bob Coasin, Nigel Crocker, Angus Gomm, Dane Laboyrie, Aaron Michael, Tim Oram, Dave Panichi, Ralph Pyl, Mark Taylor, Craig Walters and Ed Wilson. We also added a string quartet (Michele O’Young, Fiona Zeigler, Jacqui Cronin and Rachel Valentine) and bassoonist Jennie McLachlan for two of the songs. Everyone played wonderfully, expertly captured by the recording and mixing engineer Brent Clark. I look forward to it being released after all this work! We have put together a video “An Album in the Making” to capture some of the sessions in the studio.